ok, i am kind of embarrassed to admit this, but I am super excited about the Twilight movie coming out. This is probably one of the most popular series/anticipated movies that you know nothing about. The books were absolutely delicious in a candy coated romeo and juliet kind of way, and they made my daily shuttle rides go by extra fast. Well, for about a week, which is how long it took me to blow through all four books. The last book was totally weird, but satisfying. And check out this trailor:

How hot is that?! I'm happy they chose Catherine Hardwicke to direct (she did Thirteen); I think she'll bring the same sensibilities that Alfonso Cuaron brought to the third Harry Potter movie. I can't wait to see how (if?) they depict the most gruesome scene of the fourth book, when the movies continue.

Yay. Prepare for your local movie theater to be swamped with adolescent girls on November 21st!
at 4:10 PM 2 comments: 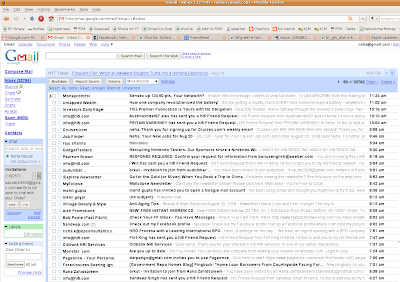 I totally understand why they didn't want people to have fewer than 6 characters in their name. Is this some sort of chat-request record?

I don't use this email account. Every single email in there is unsolicited.
at 2:45 PM 4 comments:

Music i saw at Lollapalooza (definitely not entire sets for all these bands):

Saturday:
Booka Shade
Explosions in the Sky
Does it Offend You, Yeah (the DJ set)
a tiny bit of Lupe Fiasco
Wilco

My thoughts: It's hard, man, staying out in the sun all day and running up and down Grant Park to see all these damn hyped up bands. After Friday, and my sunburn, I was like, I'm taking it easy. Hence the shorter schedules Saturday and Sunday. Also, 75,000 people on one field for Radiohead basically means that unless you're willing to be a rabid psycho and camp out for half the day, you're going to be waaay in the back, watching the pretty flashing lights -- that sort of sucked, cause i love Radiohead, but i've seen them twice already. oh well. Everyone said their concert was terrific, and it did look that way. From 0.4 miles away.

Girl Talk was excellent, and I was totally right up in front, along with this douchebag 7 foot asshole and friend who started humping people and saying mean racist things. Also stuff like "I'm tall. yeeaaahhh. you better get out of my way, i'm going right to the front." who does that? I am posting his picture in retaliation: 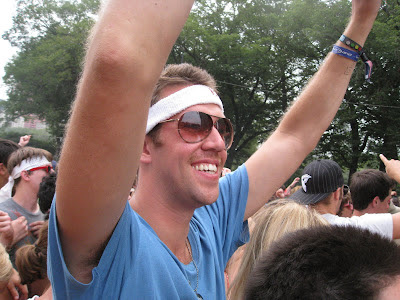 Doesn't he look like a douchebag? If you see this man, punch him in the nuts. thank you.

Anyway I was up in the front until people started moshing and falling everywhere and it got really scary. Then I hightailed it to the side, because I am a 5'2 scaredy cat (see, this is why I didn't go to rage). The funniest part was the end, when he put his music on autoplay and surfed the crowd in a big inflatable raft: 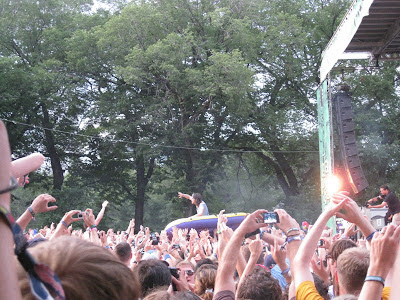 There was so much shit left on that field after the show -- shoes, a bazillion plastic cups, clothes. There was a bra hanging from a tree: 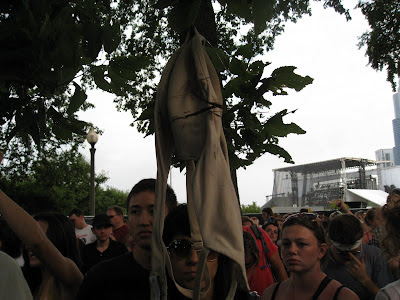 See, I'm not kidding. Is Gregg Gillis really worth your bra, ladies? I mean when it gets down to it, he is just clicking buttons on a macbook.

Anyway, the DJ tent (Perry's) was all around very good and fun. Lots of awesome music and dancing there. Also, I was surprised by how much I liked the quieter bands like Iron and Wine and Explosions in the Sky -- it was so pleasant to just chill out in the grass and listen. CSS and Mark Ronson were sort of lame, in different ways. Wilco was very good but boring since I only know Yankee Hotel Foxtrot, and they only played 3 songs from it, and I kind of regretted a little not at least checking out the Rage Against the Machine show, though I heard they had to stop playing 3 times because people at the front were getting crushed through the front barrier. Insane.

Kanye is a baller, and puts on a great show. I even had an excellent stairs position, so I could see everything, but I had this nagging feeling that I would regret it if I didn't go see Trent Reznor. So halfway through I ran across the gigantic park and made it to NIN right in time for Terrible Lies, soon to be followed by Head Like a Hole. which was AWESOME. so incredible. I don't think of myself as being really into NIN, but when I was in 9th grade, man. I bought their CD. I remember that supposedly one of our high school math teachers DATED TRENT REZNOR when she was in high school. and she was a CHEERLEADER. that's the type of thing that blew our minds when we were 14. The second to last song was Hurt, which was also great. 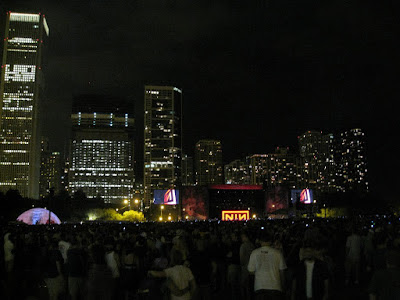 All in all I'm way too old for this shit. If I do this again, I'm going princess and buying VIP tickets. I am so dirty right now. My feet really really hurt, my hair is disgusting, and my shoulders are sunburnt. I'm pretty sure I've lost some hearing, too. Also, Bud Light is really gross. None of the shows were as amazing as Daft Punk 2007, which ranks as the Best Concert I Have Ever Been to in My Life, but it looked like Radiohead might have given it a run for its money if I were closer. I don't think I'm able to anoint a best of Lollapalooza 2008! And for all my whining, it was fun, and made me realize I should listen to more music (I used to listen to new music like crazy, but then Napster shut down and I got confused. Oh yeah, I'm that old). But first, tomorrow I am going to get the most gigantic pedicure ever.
at 11:41 PM 4 comments: 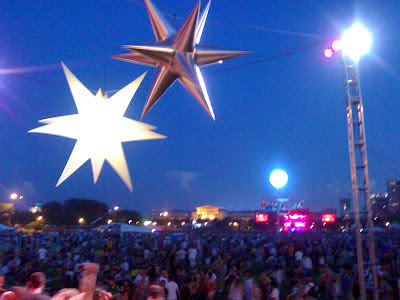 at 12:12 AM No comments:
Newer Posts Older Posts Home
Subscribe to: Posts (Atom)