a week plus on the east coast

I'm here! I'm doing it! I'm a grad student! You have no idea how weird it is to say that.

Random thoughts and observations:
I'm living in Back Bay, on Newbury Street, which is really nice. I'm still getting started on research, but I think initially I'm going to work on this.

So far so good. But we'll see how things are after classes start next week.
at 6:21 PM 4 comments:

coming out with a new position

I've spent so much time trying to explain to people why Hillary Clinton would make a better president than Barack Obama (Her intelligence. Hard work ethic. Deep, detailed knowledge of the federal government and how to get things done. Ability to execute. Foreign policy experience) that I often don't get a chance to reflect upon Obama's strengths. This article in the New Yorker is an interesting comparison between them (I'm sure the bastion of liberal intellectualism is squirming on who to support).

One thing I don't feel like is mentioned enough about Obama (too many people have talked about the polls on his likability across party lines) is the way the conservative machine could chew him up and spit him out if they felt like it. I think we all too soon forget what happened to McCain in South Carolina in 2000 (remember the spin that his adopted daughter was a mixed-race out of wedlock child?) or to the AARP when they opposed Bush's social security plans. The AARP was villified as being unpatriotic. who does that? Just because they haven't started yet doesn't mean it won't happen -- one benefit of a Clinton nomination is that pretty much all her dirty laundry was vetted in the nineties!

Ok, so that's not a strength. Man, this is hard. Ok, Obama is extremely charismatic. And inspiring. And having a figure like him standing up and conveying policy to the people would be really valuable when trying to deal with our intensely polarized political climate -- which is why I have a new position to announce:

Given the vitriol between the two camps it might not be possible, but who says you have to be President to be an inspiration? I think he would make an excellent VP. I simply don't trust Obama to have the ultimate role of running this country -- he hasn't demonstrated any evidence that he would do a good job. But I think he'd be quite good in the public eye, and I really think he has strengths concerning presentation and uniting differing opinions that Hillary lacks. If they could get along, they'd be a great team.
at 8:43 AM 5 comments: 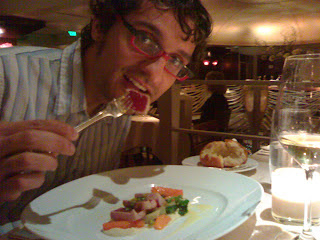 At jardiniere. Omar is having the tasting menu.
at 12:34 AM 1 comment:

where to park your money

I found the most awesome blog today. The Finance Buff, who has these amazing calculators just built right in to help you make financial decisions.

I know a lot of people go rate-chasing, after EmigrantDirect or HSBC or whatever bank of the moment is offering the highest rate, but I'm way too lazy to move my money around that much. In addition, I did a bit of calculation a while back, and I found that those rates aren't even comparable to Vanguard's CA Tax Exempt Money Market Fund (for me). The thing that most people don't realize (and honestly, probably don't have to think about because they are in fairly low tax brackets) is that what you really need to look at is after-tax return. I'm in a high tax bracket right now, and also in a state with a high income tax, so basically no matter how I dice it (excluding AMT, which I don't want to go into right now) I shouldn't even bother rate-chasing since Vanguard's fund is so awesome after taxes. If you're in CA, NJ, NY, OH, or PA, you should think about this too. And the finance buff guy person has this super cool calculator so you can figure out what's best for you! He He/She even links to all the funds' pages so you can find current rates, and shows you how to add in AMT (just leave that part blank if you don't know what AMT is. It probably doesn't apply to you).

Anyway, what I found was that right now I'd need to get something like 5.3% in a taxable account to make it worthwhile to move my money from Vanguard CA Tax-Exempt, and no one is even offering that. The best I found from www.bankrate.com was Countrywide, which is offering 5.11%, and Countrywide is scary and possibly evil. I don't understand why more people in CA don't use the Vanguard fund -- it's so much easier than shifting money between banks and paying attention to teaser rates.

Back to the AMT thing -- the finance buff guy person also has this great explanation of marginal tax rates in AMT. Marginal rates are confusing. Explanations are good. Yay.

oh btw ianal ianafp etc etc etc. aka this is not financial advice, you probably shouldn't make any decisions whatsoever based on what i say.

Oh, and of course the way I find all this stuff is through postings on an internal mailing list. I need to figure out how to mine this data better -- half the time someone emails something, I glance at it, and it enters into the deep abyss that is all the email that's not in my inbox. There's so much valuable stuff in there.

Edit: I made assumptions about this person's gender, which are totally unverified. Fixed.
at 3:03 PM 3 comments:

i have to say, i've come around. i like starbucks. Interesting article from Arts and Letter's Daily on the guy reading the book on Starbucks. I like this bit on Fair Trade:

Starbucks hasn't made much of a commitment to fair trade. But to Clark, this isn't very damning, because he doesn't regard fair trade as a viable solution to the coffee problem. Fair trade farmers, he says, get paid a fixed price, so they have no incentive to produce quality coffee—"It's an open secret," he writes, "that Fair Trade beans have historically been much lower in quality than their unsanctified cousins." And how many consumers will really pay a higher price for worse coffee? Starbucks, meanwhile, buys high-quality beans on the open market, for which it typically pays a few cents less per pound than the sanctioned fair trade price (last year, it paid more). Clark believes that this approach has the potential to raise living standards for far more farmers than fair trade, which is, essentially, an elaborate charity. "If you want to advance the welfare of farmers and their families," he concludes, "you'll have to indulge your taste for high-quality beans as often as possible."

Yes! A reason to buy lots of delicious overpriced coffee! Another thing I'm going to miss from Google. We have 5 canisters downstairs right now of delicious premium barefoot roasters blends.
at 6:12 PM 3 comments:

update on my life situation - moving to boston

I am leaving for boston in a week! I'm starting a phd program at MIT in computer science. I'm going on leave from work for a few months, but I plan on being back full time over the summer. I'm going to start in the PDOS group. I was accepted for Fall of 2007 but I deferred for a semester, if you're wondering why I'm starting in January.

I don't really see this as a big move, as I will still keep most of my stuff here in SF and come back to visit frequently. I'm excited about doing something new and exercising my brain in different ways. I'm sort of freakishly paranoid about losing connections between neurons. My father so conveniently told me on my 25th birthday that this is the age at which you stop building new ones (your brain plateaus) but I think engaging in different kinds of strenuous mental activity can help combat that. I'm betting MIT will oblige.

I love working at Google and I'll miss it a lot, but I realized that 1) if I'm ever going to go back into research I had better get on it and 2) I really, really, really need to do something different. And change the ruts I've gotten stuck in with the way I think. I'm not sure how this will go (if I'll really be there for six years) but I think it'll be a great experience no matter what happens.

I'll miss everyone in SF very much! I'm scared of the cold! I'll be doing some kind of going away thing next weekend, and if you're ever in Cambridge send me an email. I think my first trip back is president's day weekend so if you're in town you should clear time in your busy schedule to see me.
at 7:37 PM 4 comments: 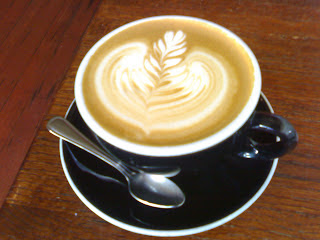 I was reading this great bit in the WSJ titled, very simply, "Why Hillary Won." I found myself more and more in agreement with the author as he touched on the inaccuracy of polls, the demographic of those who vote for Clinton vs. those who vote for Obama, and a few of the flaws with Obama and the strengths of Clinton (it's no secret I'm a Clinton supporter and of course who doesn't like seeing their viewpoint validated). An interesting point made about Obama's experience:

Mr. Obama has failed to rise to leadership on a single major issue in the Senate. In the Illinois legislature, he had a habit of ducking major issues, voting "present" on bills important to many Democratic interest groups, like abortion-rights and gun-control advocates. He is often lazy, given to misstatements and exaggerations and, when he doesn't know the answer, too ready to try to bluff his way through.

Mr. Obama is an inspiring figure playing a historical role, but that's not enough to push aside the former First Lady and senator from New York. She's an historic figure, too.

Continuing, the author laid out very simply the road ahead for the nomination. Then I got to the end of the article, and I saw the following:

Oof. Do I feel played. Competing gut reactions: My Clinton-loving instincts vs. the nausea induced by Karl Rove. So what's the agenda? Why did Karl ROVE, of all people, write this?