If you're going to San Francisco...

When it rains it pours. I enjoy this column in the WSJ called Act One, which is written by Emily Meehan, a twentysomething writer who used to live in Alaska of all places. Act One is supposed to be about issues facing our age group, and she's written about things like dealing with income disparities among friends to deciding when to move back in with your parents. All with the sort of dryness you'd expect from the WSJ.

The most recent article is about the job situation in San Francisco. Emily recognizes that a lot of recent college grads are interested in moving here since it's so lovely and less crazy than New York, but due to its appeal and tight job market a lot of them end up working in a coffee shop while waiting for a more worthwhile offer. The comments in the forum are particularly interesting, SF inspires polarization -- to some it's the best place on earth and to others it's absolute hell. It's also interesting to read the comments from people who moved away from smaller cities like DC to San Francisco and are completely happy with their choice -- I wonder if there's an element of self-delusion to validate their choice, or if they're really getting enough value out of living here to put up with the cost of living and the insane local politics (and in case you haven't figured it out by now, I tend liberal).

I'm still trying to work out exactly how I feel about this city. Many of us have a tendency to find problems with what we have and idealize what we don't, so this is probably not a question I can answer objectively. I just keep telling people it feels so fake, but I'm not sure what that means.
at 2:44 PM 3 comments: 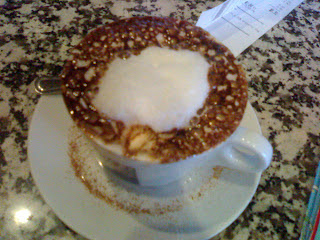 A really delicious cappucino in boston's north end.
at 5:26 PM No comments:

sunset on the charles river 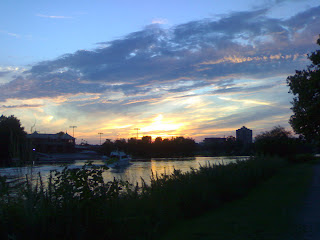 View from JFK park. maybe i should move to boston.
at 7:50 PM No comments: 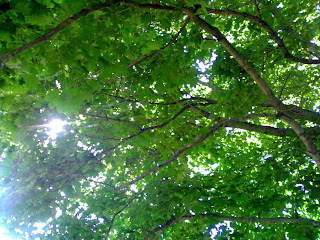 I was sleeping under, in my salwaar kamese(sp?)
at 4:04 PM No comments: 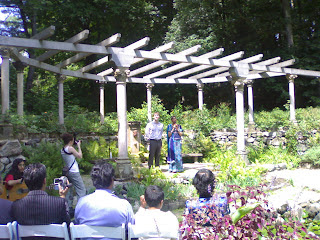 Omar's cousins, celebrating their marriage in Boston.
at 11:54 AM 2 comments:

Why live in a major city?

where i choose to live is something that i've been thinking about a lot lately. Happiness is a complicated subject, and it's pretty clear that people aren't always good at making decisions that will make them happy in the long run. i'm from a boring suburb 40 miles away from chicago, and i went to college pretty much in the middle of nowhere, so when I graduated I was dead set on living in a city no matter the cost. I moved to the bay area for a job in Mountain View but always intending to live in SF, and I drove down to work 5 days a week for 2 years before there even was a shuttle (uphill both ways in the snow, of course).

But lately I've found myself daydreaming about living in a small town. Which is so weird! I'm 25! Small towns are for married people with kids who are looking for good schools and low crime rates. I want culture and wine bars.

But at what price? SF is sort of a hard city to live in. I live in this super trendy neighborhood which gets written up in the nytimes, but gangs run rampant and someone was shot 2 blocks from my house. Compared to anywhere but Manhattan, my rent is off the charts. My local bus line (the 14/49) is full of more crazies than an insane asylum, and I'm pretty much guaranteed to get harassed walking to the bus stop (in multiple languages). All these things are little balls of stress that add up and make me less happy.

It's interesting to examine the assumption that living in a larger city is automatically better if you're young. I'm not going to talk about people who have children or are married and want to live a quieter lifestyle -- that's not me and I think there's something to think about even for young people who want to go out a lot. There are just so many people I know who see the major cities as the center of the world, and feel that living anywhere else would be inconceivable. I think people underestimate the costs they're really paying and overestimate the benefits that they get.

There are other cities besides LA, New York, and San Francisco

And almost all of them have bars, wine, opera, symphonies, parties, young people, books, fashion, a tech community, public transportation, and parks. And often times the rent and crime rate is a lot lower.

You don't need the best

I think this is something that I have a hard time admitting to myself. I don't need to live in the city with the most Michelin stars. I've never even been to the French Laundry. I don't need the city with the tallest skyscrapers or the trendiest new bars. Guess what: you're not Donald Trump, or a member of the Astor family. You are not going to own a pied-de-terre overlooking Central Park. You are not going to sleep with models every night. Which brings me to another point...

Sometimes you can do better without the best people

This applies in two different ways. I think the recent article in the nytimes about working millionaires shows one of the great problems with figuring out what makes you happy: sometimes it's beating your peers. If you make your peers the richest, most beautiful people in the world you're probably going to get very depressed.

But this also makes sense career-wise, as well. People talk about the concentration of highly intelligent people, venture capital, and entrepreneurs in the bay area, and I totally get that. But guess what? There are startups in smaller cities too. There are tech communities in Seattle, Chicago, Pittsburgh, Austin, Orlando, Madison, Burlington, Hanover, and all sorts of other crazy places. And they do great stuff! I think there are a lot of people who instead of thriving off of the tech community in the bay area, get discouraged and might not pursue something because they feel like they're not as good as their peers. Being surrounded by brilliant people, and knowing that you're not in the same league, can occasionally be a downer. If you've got an idea in the bay area, you've got to compete with all the other entrepreneurs out here vying for talent, attention, and venture capital. Granted, if you're in Pittsburgh, there's a smaller pool of all three. But there's also fewer startups -- and I think the benefit of that outweighs the reduced resources.

I lived in New York for 2 months in 2004. I actually had a really nice apartment in a great neighborhood, and I was still going nuts at the end of it wanting to see a tree. I think living in high density areas without reprieve can be really bad for people, though this totally varies from person to person. My parents' house in Barrington Hills is at least 30 minutes away from ANYTHING. But I can't describe how relaxed I am when I visit, even though I drive more. The last 15 minutes on the way home is through these narrow, wooded roads that pass through meadows with horse farms. It's beautiful. And even though everything else is packed with strip malls, it's all clean and new and I can *park*. Never underestimate the mental benefits of free parking.

Relationships are more important than opportunities

Another thing I didn't realize when I graduated. I never understood the people who go to college in the same state they went to high school, or the ones who come back and live in the same city where they grew up. Living in different cities and breaking out of what you know is such a cool experience. And there's a part of me that still wants to live in Berlin and New Delhi. But I know now that regularly seeing people who love you is more important than your job or how much money you make. You can't put a dollar value on distance from your family. Hard lesson to learn.

So the result of all this? I don't know. I'm questioning whether this city is really worth it.
at 3:26 PM 11 comments:

so more women are going to college, but it seems like in the highly educated positions women still aren't getting the same paychecks. I wonder if it's because they aren't attaining high positions or if paychecks for the same levels vary by gender.
at 1:54 PM No comments:

this article is totally depressing:

makes me think I need to get out of silicon valley sooner rather than later.
at 11:38 AM No comments:

I went to Lollapalooza yesterday. Normally giant music festivals in the searing heat aren't my thing, but it was definitely worth it to see daft punk. I also got to see Blonde Redhead (good), LCD Soundsystem (awesome) and I caught a bit of moe. who were ok. 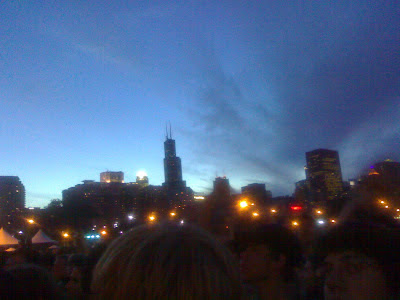 The chicago skyline as it started to get dark and the area in front of the main stage started getting more and more packed. You don't want to know what I had to go through to get close to the stage.

The crazy pyramid and light show that they put on. 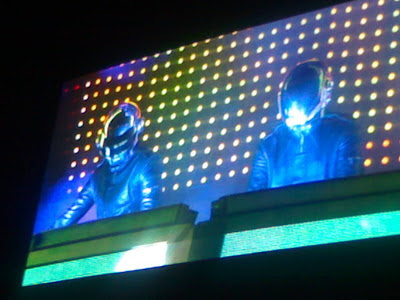 The two space robots at work.

More music and lights. That arm in the way is my sister's coworker, who totally couldn't remember where he parked and had us walking around a giant creepy parking garage forever trying to find his car. 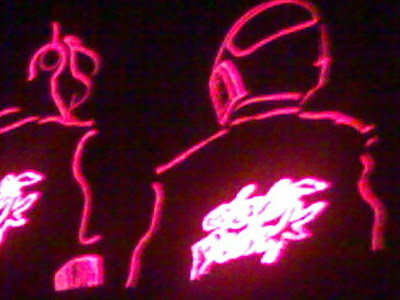 The real end of the show, after the encore. they had this awesome special effect where red light seemed to drop down the scaffolding, up the pyramid, and lit up their suits.
at 7:45 PM No comments:

if abortion were illegal

then what should happen to women who have abortions?

I would embed it but it's been disabled. It's incredible to see how people who campaign for making abortions illegal haven't even thought about what that would mean.

This article has more, and I originally found this through jezebel.
at 5:15 PM 1 comment:

I hate it (and love it) when I find an easy solution to something that has bugged me for a long time. Do you read xkcd.com? You should, it's awesome. Anyway I have spent months hitting Ctl-u and Ctl-f to find some part of the funny tooltips on that site, and now I just installed this: