i watch too much tv

In the interest of procrastinating doing real work, and having nothing else to write about, I have decided to post my list of season passes on my Tivo. I recently bought a dual tuner Tivo so I had the pleasure of writing down the list from my old one and re-entering everything into my new one. Since Tivo's are totally internet-friendly, you'd think they'd have a way for you to oh, say, upload your season passes somewhere so you could easily transfer them should you do something crazy like upgrade your system, but they don't. So now my remote-hand has carpal tunnel.

P.S. This is totally embarassing.
Dear god almighty. I mean, not all these shows are on all the time, but holy crap. I have a part time job, and it's called watching tv. Imagine what else I could be doing with all the hours I spend watching this stuff? (and I would like to point out that I fast forward through commercials so it's more like 43 minutes per show instead of 60. Which totally makes it totally ok. Right?)
at 12:47 AM 2 comments:

turning a sphere inside out

you are soooo lucky i don't have more graphic pictures to add to this post.

So I love pumpkins. And halloween. I went to a pumpkin patch, I bought Halloween cards (which I forgot to mail, so if I like you, you were probably going to get a Halloween card, but now it's too late and weird). I even had a pumpkin carving party, and a few lovely carved jack o' lanterns were left to grace our door step. 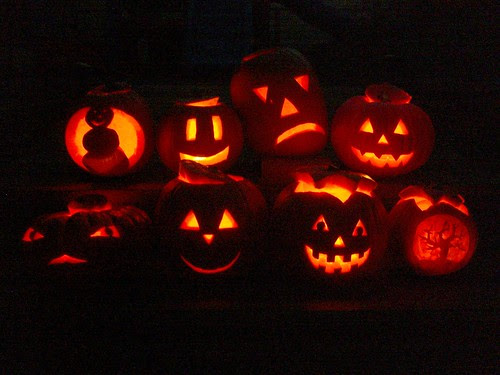 Then the lovely carved pumpkins started rotting. At least, that's what Omar said. Which is sort of gross, but ok, it happens, right? I mean, it's never happened to ME before (pumpkins rotting 3 days after they're carved) but it's warmer out here and this is the first year I've put them out so fine. And I didn't really have to deal with them, Omar is the one who threw them out. Composting them, naturally.

But last night. Oh last night. There were two carved pumpkins sitting on our dining room table, one of them being my classic grinning toothy pumpkin (upper right in the picture), and they were both FULL OF MOLD. FULL OF DISGUSTING FUZZY GREEN AND GREY MOLD. and they were SQUISHY. They had sort of started leaking, and my table runner was soaked through with ROTTING PUMPKIN JUICE.

My cute toothy grinning pumpkin had a smile FULL OF FUNGUS.

I had to attack them with plastic bags and rubber gloves and I still feel sort of gross. Ew. I can't believe no one noticed we had two very unattractively rotting pumpkins on our dining room table.

This was sort of traumatic. I don't think I'll ever be able to look at a pumpkin the same way again.
at 4:56 PM 4 comments:

"Respondents in the United States and England, for instance, listed “inspiring others” as a most important leadership quality, and then rated women as less adept at this than men. In Nordic countries, women were seen as perfectly inspirational, but it was “delegating” that was of higher value there, and women were not seen as good delegators."

"But Professor Glick also concedes that much of this data — like his 2000 study showing that women were penalized more than men when not perceived as being nice or having social skills — gives women absolutely no way to “fight back.” “Most of what we learn shows that the problem is with the perception, not with the woman,” he said, “and that it is not the problem of an individual, it’s a problem of a corporation.”

I wonder if this is true in engineering as well (women are penalized more harshly than men for showing anger).

Oh man. First I was like, "this is awesome!" then, "this is so wrong." and now, i'm just wondering why i didn't think to be jem for halloween.
at 7:15 PM No comments:
Newer Posts Older Posts Home
Subscribe to: Posts (Atom)